Do you know how sometimes you come across a song that really takes you back to the past? This particular song is not just from a travel adventure, for me it’s also associated with a woman I was madly in love with…

Explorer George Vancouver was one of the first Europeans to visit this area. He named the deep fjord east of town Lynn Canal, after his home port of King’s Lynn in England. In 1879 the Chilkats invited naturalist John Muir and Presbyterian minister S. Hall Young to establish a mission and school at the current site of Haines. The settlement soon grew, with clapboard Victorian houses and tidy, fenced yards. Nowadays it’s the venue for the Southeast Alaska State Fair and Music Festival, which is held each August. You can sometimes see humpback and killer whales in the deep waters of Lynn Canal.

Yup, Haines looked a real dandy place, yet I drove straight on through to the ferry terminal, which was a few miles further up the Lynn Canal. I then received the bad news: an extremely pleasant young lady behind a sheet of glass told me that all the southbound ferries were booked solid. Well, how solid is solid, I asked? She tapped away at her computer terminal and frowned. The next available space for a car going south was in eight days time. By way of an apology she told me that next week the tourist season was almost over and there’d be more space on the ferries.

Beautiful as Haines is, I couldn’t afford to spend eight days there. Hmm… maybe I could spend the winter in Haines, and get my masterpiece written? I pondered on this idea, but not for long. Haines is a very small town and with the tourist season over it seemed an unlikely place to find work for a down-on-his-luck Englishman without a work permit. If I was going to stay on in North America for the winter I needed to earn some money. I’d left the golden opportunity for this behind in Fairbanks. Therefore I needed to head down south, back to civilisation and a job market.

I’d spent the best part of the day driving down the Haines Highway, and spectacular as the scenery was, I had no desire to spend most of tomorrow driving back up it. I consulted a big area map on the wall of the ferry terminal. Skagway seemed to be the answer, just ten miles further up at the end of the Lynn Canal. From Skagway I could drive back to the Alaska Highway, thereby saving hundreds of road miles.

The pleasant young girl said there’d be no problem taking the ferry to Skagway. That was northbound. At this time of the year everyone was heading southbound at the end of their Alaska vacations. The northbound ferries were largely empty. The next one left at 5am the following morning. I booked myself and the car on the ferry and then headed back into town. 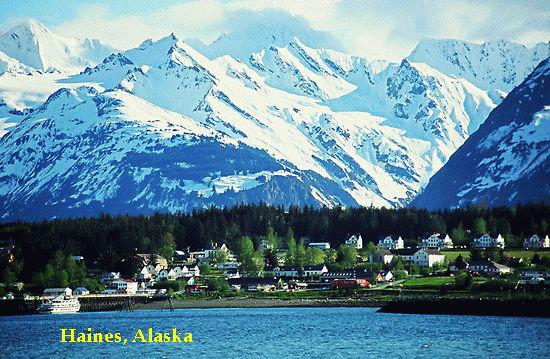 Back in Haines I found Saturday night in full swing. There are only three bars in the town. I avoided the rowdiest one and the quietest one and went for the mid option, a joint called the Blue Lobster. I had a steak there and watched the Saturday night rituals taking place around me. You know that feeling you have, when you’ve just eaten a big and satisfying meal, and are sipping beer, or whatever? That’s how I felt, an outsider in this small community in the middle of nowhere. It was the night of the full moon. A huge golden globe hung over the fjord, throwing twilight across the surrounding mountains and forests. The juke box had been playing all night, and then someone put on Neil Young’s Harvest Moon…

The above text excerpt is from The Yukon Queen.

This entry was posted in As I Walked Out One Summer’s Morn, Some other Stuff. Bookmark the permalink.